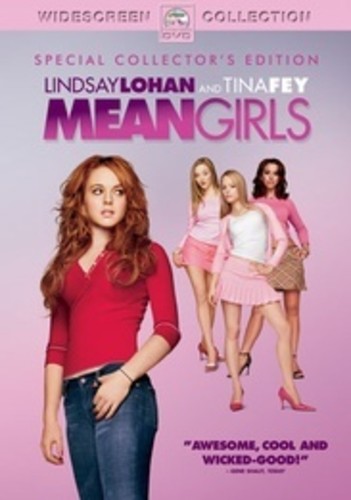 MEAN GIRLS - DVD - In this survival-of-the-fittest teen comedy, high school is a dangerous jungle seething with teenagers who prey on each other like wild animals. The nonstop jokes are hilariously rewarding as they exaggerate adolescent vanity and satirize political correctness issues like race, class, and homosexuality. Here, the Plastics are the most popular girls in school. They wrote the rule book on Girl World, like always wearing pink on Tuesdays. And they're mean. So when pretty new girl Cady (Lindsay Lohan) arrives in school, the first thing they do is make fun of her. Then they try to win her over. Cady is torn between social cliques. She befriends the punky rebels Janis (Lizzy Caplan) and Damian (Daniel Franzese). But the guy Cady wants to date is friends with the Plastics-Regina (Rachel McAdams), Gretchen (Lacey Chabert), and Karen (Amanda Seyfriend)-so she has to be resourceful. Problem is, the two groups hate each other. Just trying to fit in, Cady jumps through hoops for the Plastics and becomes a mean girl in the process. Though her transformation is radical, when the final act of meanness is done, she learns a few valuable lessons. SATURDAY NIGHT LIVE writer Tina Fey contributes the script and also stars as a teacher, quietly smirking at her own jokes throughout the antics. Directed by FREAKY FRIDAY's Mark Waters, MEAN GIRLS doesn't miss a beat, following the faithful formula of teen fare such as SIXTEEN CANDLES and HEATHERS. The soundtrack features songs by Blondie, Missy Elliot, Pink, The Donnas, and Janis Ian.