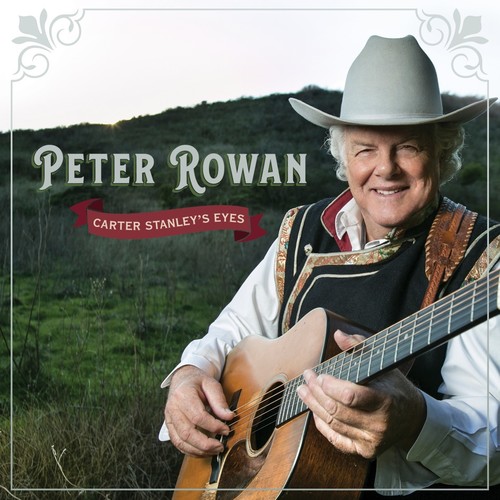 2018 release. Peter Rowan was just a young bluegrass boy when he caught the attention of Bill Monroe, who made him an actual Blue Grass Boy in 1963, or maybe '64. Rowan isn't certain exactly when he became the band's guitarist and lead singer, but the moment Monroe introduced him to fellow icon Carter Stanley is etched in his memory just as indelibly as the inked entry in his 1966 diary. Within a few months, Stanley would be gone, but the impact he and his brother, Ralph, had on Rowan - and the world - would grow even stronger. He acknowledges their influence, and finally gives the story of that meeting a definitive telling, with his debut Rebel Records release, Carter Stanley's Eyes. Rowan, who produced, gathered several luminaries to join him on the journey: lead guitarist Jack Lawrence, of Doc Watson's band; mandolinist/vocalist Don Rigsby, whose 2010 album, Doctor's Orders: A Tribute to Ralph Stanley, features Stanley and alums of his Clinch Mountain Boys; guitarist/vocalist Tim O'Brien (Bluegrass Dukes, Hot Rize); percussionist Jamie Oldaker (Eric Clapton); and banjoist/guitarist/vocalist Patrick Sauber (seen in the film A Mighty Wind). They're joined by Rowan's Bluegrass Band mates: Blaine Sprouse on fiddle and vocals, Chris Henry on mandolin and vocals and Paul Knight on acoustic bass. Together, they do indeed honor their forebears, staying faithful to tradition instead of going for what Rowan calls the "razzle-dazzle"of progressive bluegrass or jamgrass. "To me, the importance of the music is in the songs," he says. "It's about the poetic material. Bluegrass is part of a literary tradition, a poetic tradition."
This website uses cookies to personalize content and analyse traffic in order to offer you a better experience.
I accept Learn More
back to top