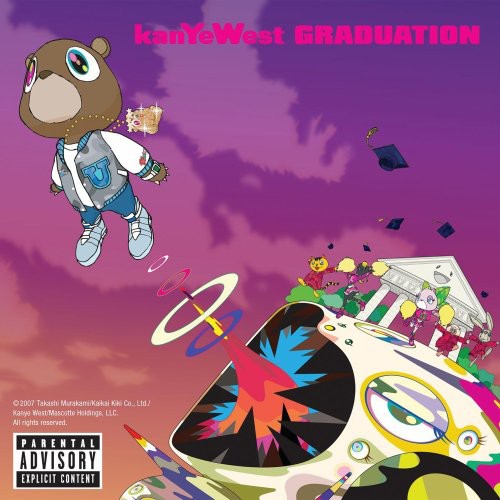 Kanye West's third album is locked and loaded for a September 11th release. One of the most anticipated albums of the year, Graduation features the smash singles"Stronger"and"Can't Tell Me Nothing."As"Can't Tell Me Nothing"heats up in the streets, the clubs and urban radio stations across the country, its synth-heavy, Daft Punk-sampling counterpart"Stronger"is blazing trails at Rhythmic Top 40 and pop radio.

''Graduation'' is the third studio album by American hip hop artist Kanye West, released September 11, 2007 on Roc-A-Fella Records in the United States. Recording sessions for the album took place during 2005 to 2007 at Chung King Studios and Sony Music Studios in New York City and at Chalice Studios and The Record Plant in Los Angeles, California. It was primarily produced by West and DJ Toomp, and features guest contributions from artists including Mos Def, Dwele, T-Pain, Lil Wayne, and Chris Martin of Coldplay. The album's cover artwork was designed by Japanese artist Takashi Murakami.

Inspired by Irish rock band U2 and other musical groups to make more inspirational, anthemic hip hop music, West incorporated synthesizer sounds into his production and dabbled with electronic music, while sampling a wide spectrum of musical genres. Lyrically, ''Graduation'' is more introspective in comparison to its predecessors, as West dedicated much of the album towards analyzing himself and conveying his ambivalent outlook on his newfound fame. It continues the college theme of West's previous two studio albums, ''The College Dropout'' (2004) and ''Late Registration'' (2005).

The album debuted at number one on the U.S. ''Billboard'' 200 chart, selling 957,000 copies in its first week. The coinciding release dates of ''Graduation'' and rapper 50 Cent's ''Curtis'' generated much publicity over the idea of a sales competition, resulting in record-breaking sales performances by both albums. ''Graduation'' received generally positive reviews from most music critics and earned West several accolades, including a Grammy Award for Best Rap Album. The album has sold 2,966,000 copies in the U.S. and has been certified double platinum by the Recording Industry Association of America. - Wikipedia

"Let's go on a living spree!" Kanye West gushes on Graduation's third single, "Good Life," and really, could there be a better statement to underscore the disparity between him and chart adversary 50 Cent? Curtis Jackson's 9/11 defeat signals an official end to the era of G-Funk radio dominance: Since 1992's "Nuthin' but a G Thang," Dr. Dre's nihilistic gangsta grind has spawned like-minded superstars in Snoop Dogg, Eminem and 50, but Kanye's fashion-centric braggadocio and wild eclecticism far better captures today's lighthearted, ADD pop spirit. Will 50 hang up his mic, or better yet, should he? Doubtful and definitely not. Although Kanye can do no wrong today, the head-to-head drubbing should reignite 50's competitive spirit (remember "How to Rob"?) and hopefully inspire a little more honesty and humility (Ă la "Hate It or Love It"). Despite his repeated claims that record buyers want consistency, we crave adventure much more. Vitamin water doesn't taste that good, dude. Favorite Kanye moment possibly ever: His remix of Fall Out Boy's "This Ain't a Scene," in which our man's cursory mid-song guest rap begins with, "Now, I don't know what the hell this song is talkin' 'bout, do you?" Um, nope'"thanks for asking! Anyway, as we pointed out in the news a few months ago, it's always strange when a hip-hop album's release date is pushed up. Graduation, evidently, is just that damn good. Originally scheduled for autumn, Kanye's third academic-themed full-length (WHICH HAD BETTER WIN EIGHT GRAMMYS OR THERE'S GOING TO BE TROUBLE) features a single that samples the living hell out of Daft Punk ("Stronger") and a collaboration with Coldplay's Chris Martin ("Homecoming"). Never let it be said that this man is predictable. The big question: Will it have anything as infectious and ubiquitous as "Gold Digger," or will Rihanna run away uncontested with the Overplayed Single of the Year award?
This website uses cookies to personalize content and analyse traffic in order to offer you a better experience.
I accept Learn More
back to top