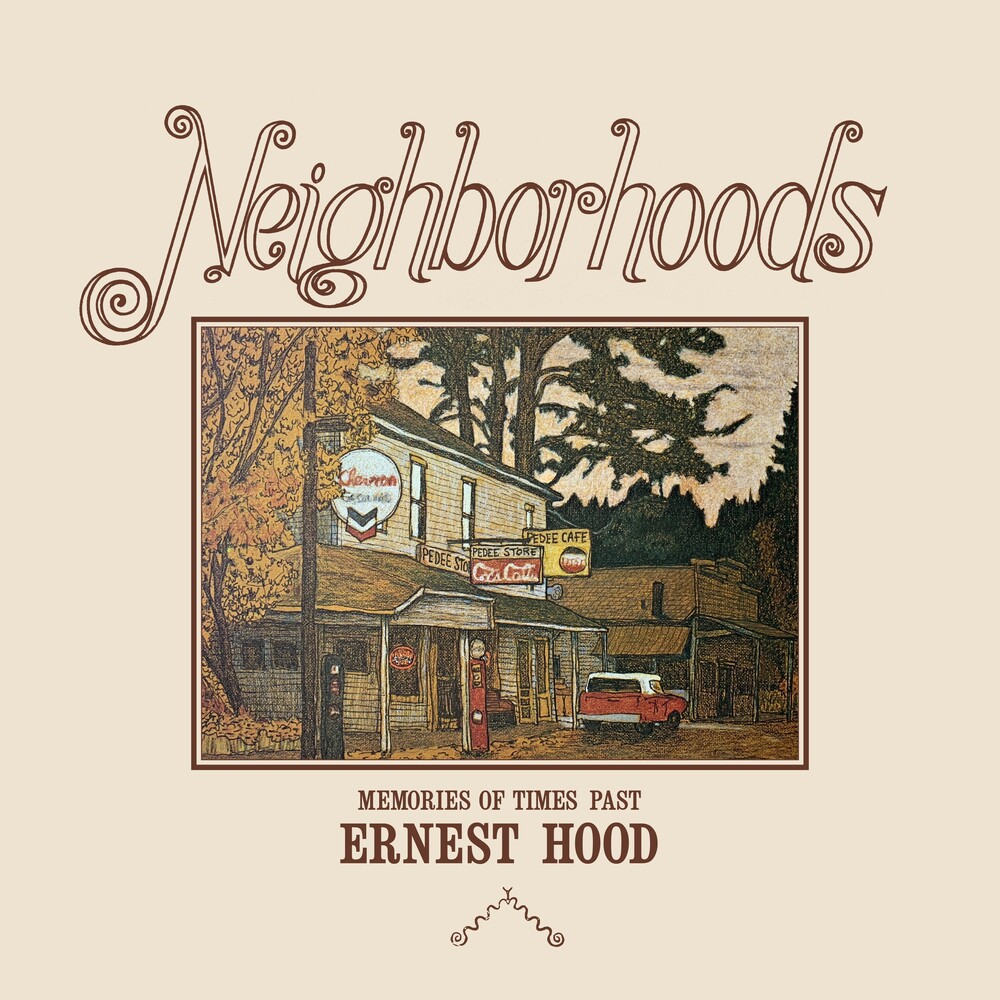 Ernest Hood's Neighborhoods was released some two decades after the Portland, Oregon born and raised musician's first forays into field recordings. These very recordings, and those captured over intervening years, define the universal sound and aural images of childhood, a theme memorialized by Hood's privately-pressed opus of 1975. Sprawling through a haze of zither, synthesizer melodies, and foraged pedestrian sound, Neighborhoods is both a score and documentary composed and directed by Hood to offer, in his words, joy in reminiscence. Hood's nostalgic impulse ran parallel to the developments of other artists, writers, and filmmakers of the 1970s who were looking back to the 1950s to convey a collective memory of childhood. Unlike some of the widely embraced work of this nature, the music of Neighborhoods eschews irony or detachment for lucidity, striving above all for a dream-like return to the details of sensory memory. Born into a musical lineage, Hood's early, promising career as a guitarist in a globe-trotting jazz outfit was cut short when he contracted polio in his late twenties. Moving from guitar to less physically-demanding stringed instruments in the late 1940s, Hood first began implementing field recordings in his jazz ensemble collaborations as early as 1956. In 1961, Hood and trumpeter Jim Smith collaborated on a local Portland television program, with their large, tight ensemble providing breakneck contemporary jazz for an action painting by famed West Coast modernist painter Louis Bunce. Hood incorporated his own field-recorded sounds of birds in the performance - an element that would resurface in Neighborhoods with great abundance among other found sounds. Whether using environmental sounds or instruments, a sense of musical narration is the central component of Neighborhoods, a strategy Hood tellingly referred to as "musical cinematography" in his original liner notes. Instead of using the picture frame, Hood broadcasts melodies and sounds from his beloved Portland surroundings to transport listeners to the story's scene. Remarkably, Neighborhoods never falls into the sentimentality trap. Hood's music augments it's indeterminate, "anecdotal" sounds with a blend of zither and synthesizer melodies reminiscent of golden age cinema soundtracks. Neighborhoods is an unusual hybrid-not quite an "ambient" record nor a collection of pure field recordings. The identifiable sounds (screen doors opening and closing, passing motorists, crickets chirping, children playing) feel both universal and highly specific, like a bulletin of Hood's private geography from the middle of the last century. There's something instructive - if not reparative - about time traveling into the bucolic dimension of Neighborhoods in 2019. If Hood were presenting the album today, he might invite listeners to unplug while locating that joy in reminiscence. In the end, the concerns of Neighborhoods are poetic not formal, as Hood's own summary of the album sounds a lot like Walt Whitman: "It hardly matters in which neighborhood you sprouted. The games we played, the mocks, the terminology and the feelings we experienced as youngsters are tantalizingly familiar." And later, hitting a grand note, "How familiar, how indelible the pictures are: aromas of soft velvet days, strong friendships, fears, hates, loves... If the music seems a little bittersweet, well... isn't that the taste of nostalgia?" Freedom to Spend has restored Ernest Hood's nostalgic masterpiece with the same care with which he viewed his source material, offering a remastered version of Neighborhoods transferred from the original tapes, expanded across four vinyl sides (the original version was crammed on two). The new edition reproduces Hood's celebratory liner notes in full, alongside new liner notes by Michael Klausman.