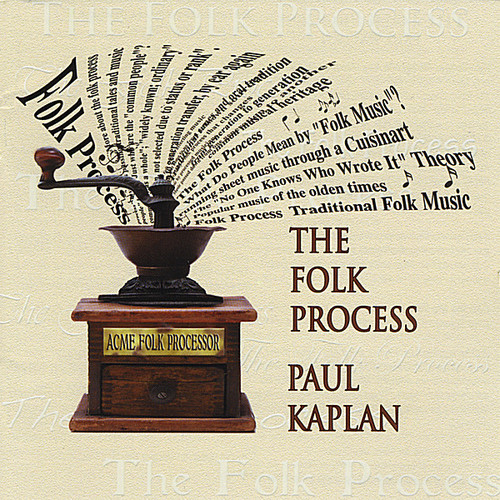 Paul Kaplan proudly announces the arrival of his new CD "The Folk Process." With this album Paul makes available for the first time on CD his classic songs 'Henry the Accountant,' 'I Had an Old Coat' and 'Call Me the Whale.' In all 'The Folk Process' contains fourteen of Paul's original songs that were inspired in some way by earlier songs. The album spans more than thirty years of writing, from 1976's 'Siegfried' (Swan Lake in four verses) to 2007 ('Run, Al, Run' and 'To Stop the War'). Paul has been called "one of the best lyricists America has" (Chatham Magazine). "The Folk Process" will show you why. 1. Call Me the Whale 2:49 From the 1982 LP "Life on This Planet;" uptempo, clever and biting. 2. Henry the Accountant 4:36 Also on "Life," but rerecorded for this album; humorous uptempo story song, played on the cuatro. 3. Just Another War 4:31 From 1985's "King of Hearts;" timeless antiwar song with fiddle, bagpipe and harmony vocals. 4. Underneath the Stars Above 1:11 From "After the Fire" CD (2003); humorous ditty about the art of songwriting. 5. I Had an Old Coat 3:15 Off of "King of Hearts;" classic song, from an old Yiddish story (and song), covered by dozens of artists, most recently recorded by Jay Ungar and Molly Mason. 6. I Can't Remember Wintertime 4:19 Poignant antiwar song with a classical feel; first of four in a row from "After the Fire." 7. Halls of a Hospice 3:55 Ballad of an AIDS victim, with parallels to (and the tune of) "The Streets of Laredo." 8. So I Could Get to You 4:51 A love song, finally! Bits of music borrowed from "Rolling Down to Old Maui," bits of lyric from Shakespeare (always steal from the best!). 9. Vacation Time 2:03 Quiet, jazzy tune, inspired by McCoy Tiner's piano on Coltrane's "My Favorite Things." 10. The Voice of Pete 1:53 Homage to Pete Seeger. 11. The Promise 3:58 A slow ballad, based on a gorgeous instrumental written by Dáithí Sproule of Altan. 12. Run, Al, Run 2:40 Political songs do not have to be dull! We tried our best, but Al wouldn't listen. 13. To Stop the War 2:00 Recorded for YouTube with a video camera. I would have rerecorded it for better sound quality, but couldn't hope to get such a stellar group together again. 14. Siegfried 3:49 The story of Swan Lake in four verses. From my first demo, recorded on a four-track in 1976, with lots of synthesized sounds. Like many of these songs, it is a serious song that just might make you smile.