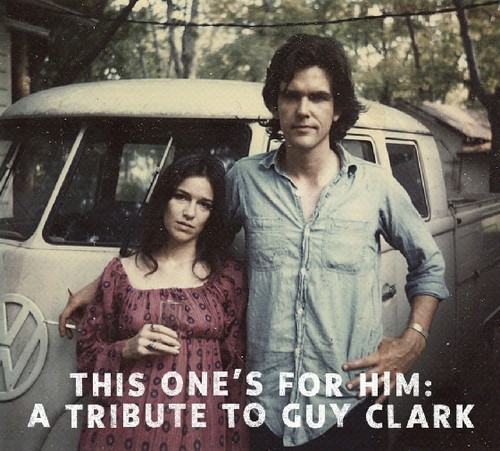 This One's For Him: A Tribute To Guy Clark
Artist: Various Artists
Format: CD
New: Not in stock
Wish

Houston's Icehouse Music will release This One's For Him: A Tribute to Guy Clark on November 8, 2011 to celebrate Clark's 70th birthday. Clark was born in Monahans, Texas on November 6, 1941. The collection was lovingly produced by GRAMMY-winning producer Tamara Saviano (Beautiful Dreamer: The Songs of Stephen Foster)-who is also working with Clark on his definitive biography-and frequent Clark co-writer Shawn Camp ("Sis Draper," "Magnolia Wind").

The tribute includes 30 tracks by 33 Americana artists who are friends and colleagues of Clark or who have been influenced by his remarkable compositions. The collection was mixed and mastered by Austin engineer Fred Remmert. Clark co-writer Ray Stephenson ("Hemingway's Whiskey," "Magdalene") painted the CD cover image. Part of the proceeds will benefit the Center for Texas Music History at Texas State University, San Marcos, Texas.

"Guy's songs are literature," says Lyle Lovett, among the venerable artists who eagerly gathered for This One's For Him: A Tribute to Guy Clark. "The first time I heard GuyClark, I thought it made everything I'd heard up to that point something other than a song. His ability to translate the emotional into the written word is extraordinary."

Clark's singular storytelling chills with striking familiarity ("The Dark"). "Songs are like Japanese painting," he explains. "Less is more. One brushstroke takes the place of many if you put it in the right place. I'm trying to get whoever is listening to think, 'Oh, man, I was there. I did that. I know what that's about.' Too many details take away." Clark's add volumes. Remember that old blue shirt? Mad Dog margarita? June bug on the window screen?

Of course, our passions forever burn brighter for the flour sack cape. Few capture courage as timelessly. "Guy Clark is like a dancer with the way he talks and a photographer with the way he writes," noted Texas indie artist Terri Hendrix says. "He's the epitome of American songwriting."

"Guy is the king in a lot of ways," says rising songwriter Hayes Carll, who has split pages in the storied basement workshop where Clark writes and builds guitars. "I think everybody who was around Guy learned a lot from him and I think the entire music world is indebted to him for what he taught other writers. Everybody who had a chance to learn from him came away a better writer. He gave me a shot before I deserved one." As friends say, Clark's a curator, a creative caretaker. He celebrates high watermarks that others achieve.

This One's for Him: A Tribute to Guy Clark returns the favor. Artists brought two key instruments: a guitar and profound reverence. Individual investments quickly emerged. Perhaps most notably, Gill claims a haunting bond. "Giant tears were falling all over my guitar as we were playing," the country star remembers about serving as guitarist on Clark's original "Randall Knife" recording nearly thirty years ago. "My dad was a lawyer, and he died when I was forty. Guy and I are tied at the hip through that song."

"Let's give her a good go and make ol' Guy proud of us..." said Rodney Crowell kicking off the collection on the first day as he readied to record "That Old Time Feeling." The double CD set was recorded live in studio with a core house band that included multi-instrumentalist Shawn Camp, guitarist Verlon Thompson, & pianist Jen Gunderman. The tribute was recorded in Nashville, Tennessee and Austin, Texas with a rotating cast of other musicians including multi-instrumentalist Lloyd Maines, bass players Glenn Fukunaga, Mike Bub and Glenn Worf, and drummers Kenny Malone and Larry Atamanuik.

Folks mostly laughed throughout the sessions. Swapped stories. Enjoyed company. Picked and grinned like those dusky evenings over at Guy and Susanna's near Old Hickory Lake in the 1970s. Fittingly, Crowell issued our collective mission statement the very first day. We think you'll agree everyone succeeded.