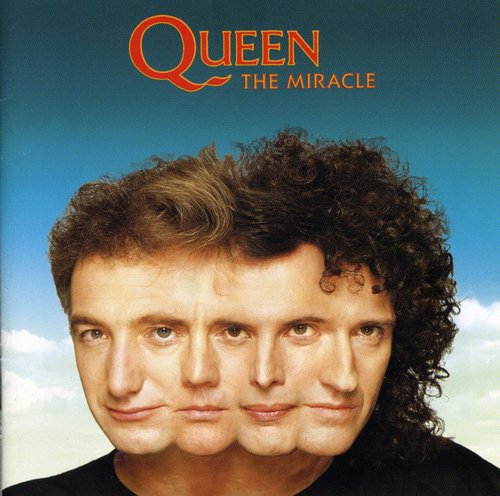 This slick and catchy 1986 album featured Khashoggi's Ship; I Want it All, and more!

It was the band's twelfth studio album, recorded as the band recovered from guitarist Brian May's marital problems and vocalist Freddie Mercury's HIV diagnosis (which was, though confessed to the band, not publicised at the time). Recording started in January 1988 and lasted 12 months.

It was the band's penultimate album before the death of Freddie Mercury in November 1991.

The album was originally going to be called "The Invisible Man", but three weeks before the release, according to Roger Taylor, they decided to change the name to ''The Miracle''. The striking cover art utilised then cutting-edge image-manipulation technology to combine photographs of the familiar faces of the four band members into one morphed Gestalt image, in line with their decision to dispense with individual credits and simply present their music as the product of Queen the entity; the back cover went a step further with a seamless regiment of the bands' eyes. The album reached #1 in the UK, in Austria, Germany, in the Netherlands and Switzerland, and 24 on the American Billboard 200 chart. - Wikipedia