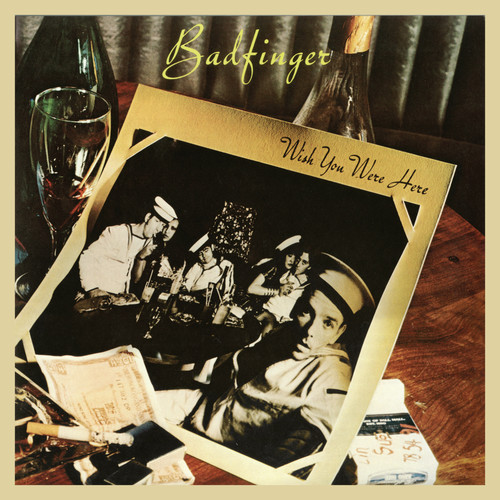 Wish You Were Here
Artist: Badfinger
Format: CD
New: Not in stock
Wish

Most folks point to Badfinger as the greatest power pop band of all time. But, with four accomplished songwriters in Tom Evans, Mike Gibbins, Pete Ham, and Joey Molland, and the creative assistance and imprimatur of The Beatles, Badfinger should have been bigger stars than they were. Their four albums for The Beatles' Apple label get most of the attention, and understandably so, with hits like "Come and Get It," "No Matter What," "Day After Day," and "Baby Blue." But their subsequent two albums for Warner Bros. Represent their true creative peak, reached even as the band-and the lives of the members of the band-fell apart. Now, Real Gone Music, together with Badfinger biographer Dan Matovina, is taking a fresh look at Badfinger's brilliant but ill-fated Warner Bros. #albums, Badfinger and Wish You Were Here. Things went from bad to worse for Badfinger as Warner Bros. #ended up pulling their second release after seven weeks in the stores due to their manager squirreling away publishing advance money, prompting a lawsuit by the label's publishing arm. Yet, somehow in the midst of all the chaos, the band delivered it's masterpiece. Recorded by Chris Thomas at the Caribou Ranch studio in Colorado and George Martin's AIR studio in London, 1975's Wish You Were Here stands as Badfinger's most cohesive and powerful artistic statement, with stellar contributions by all four of the band's songwriters. It's an album without a weak track, so it's hard to single out any songs, but Ham's "Dennis," Molland's "Love Time," and Evans' "King of the Load" might take the honors. For this Expanded Edition (which offers a new remastering of the album for the first time since it was initially released on CD), we've unearthed an unreleased song ("Queen of Darkness"), and uncorked eight new remixes that highlight many un-used vocals and novel instrumental arrangements. Matovina's notes include exclusive quotes from original producer Chris Thomas. The last and best record with the original line-up, now fully unveiled!