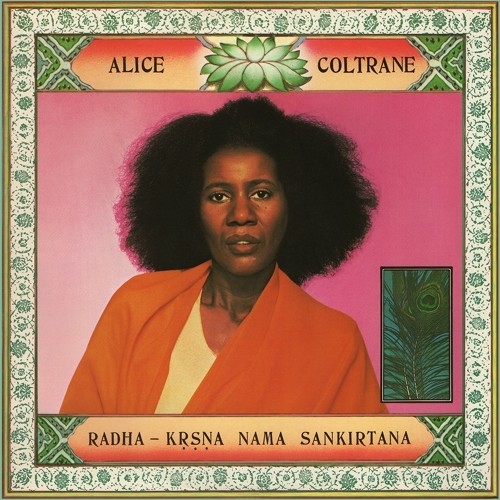 Vinyl LP pressing. Radha-Krsna Nama Sankirtana was the first of two albums Alice Coltrane released in 1977 (the other being Transcendence). Coltrane's music during this period grew out of an epiphany in which she would renounce secular life and don the orange robes of a swamini (spiritual teacher in the Hindu tradition). Musically, this meant leaving jazz behind (at least partially) and embracing the chants and rhythms of devotional music. The first half of Radha-Krsna is mostly filled with simple arrangements of bhajans (Hindu devotional songs) and features the singing of students from the Vedantic Center, the Ashram that Coltrane founded in 1975. The group bounces with the joy of a gospel choir (not coincidentally, some had backgrounds in Southern Baptist churches). A rapturous aura permeates opener "Govinda Jai Jai" with Alice leading on Fender Rhodes. On "Prema Muditha," she returns to acoustic piano (her main instrument in the early part of her career) to deliver a powerful and poignant theme. Sidelong "Om Namah Sivaya" beams with probing organ improvisations accompanied by the drumming of her 13-year-old son Aruna John Coltrane, Jr. This closing track offers a strong indication that even if Alice Coltrane was turning toward new traditions for inspiration, her music was still something that only she could make.
back to top