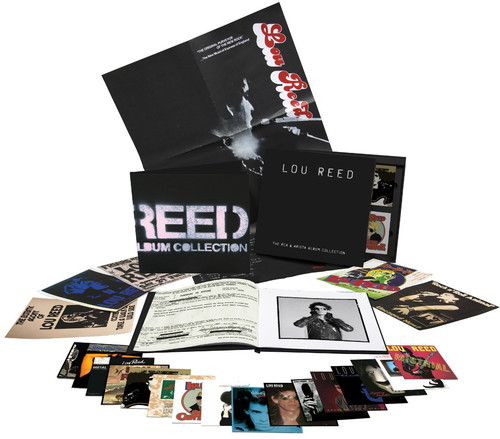 Lou Reed - The RCA & Arista Album Collection brings together--for the first time in one comprehensive anthology 16 groundbreaking studio and live album titles written, recorded (and often produced) by Reed as a solo artist following the 1970 dissolution of the Velvet Underground. Each of the 16 albums (Lou Reed Live Take No Prisoners, from November 1978, fills 2CDs) in the 17CD library was newly remastered under Lou's direct personal supervision, a long-term project completed shortly before the artist's passing, at 71, on October 27, 2013.

"This box set was Lou's last project. He oversaw the remastering of all of his solo recordings made for RCA and Arista Records....This work was done at New York's Masterdisk in June and July 2013, with engineer Vlado Meller and Rob Santos of Sony/Legacy," Hal Willner wrote in his liner notes for Lou Reed - The RCA & Arista Album Collection. "Everyone who was in that room or around Lou during this period witnessed a beautiful thing as he enthusiastically relived that whole period of his work with the joy of rediscovery, excitedly pointing out subtleties in sounds he hadn t heard in years. In retrospect, reminiscing about these sessions done less than four months before he died, the moments seem even more magnified."

Lou Reed - The RCA & Arista Album Collection--produced by Lou Reed, Rob Santos, and Hal Willner offers fans access to several titles which have been out-of-print, hard-to-find or unavailable in the CD and digital music eras.

This limited edition 12"x12" deluxe box set, Lou Reed - The RCA & Arista Album Collection is the ultimate tribute to an essential epoch in Lou's career as a transformative figure in American music. This definitive anthology contains 16 full-length albums on 17 compact discs in addition to an 80-page hard-bound book featuring memorabilia from Lou's personal archives, rarely seen photos and artwork, interviews with Lou conducted during his years as a recording artist for RCA and Arista and evocative in-depth liner notes written by Lou's longtime friend and the collection's co-producer Hal Willner chronicling Lou's involvement with the making of Lou Reed - The RCA & Arista Album Collection.