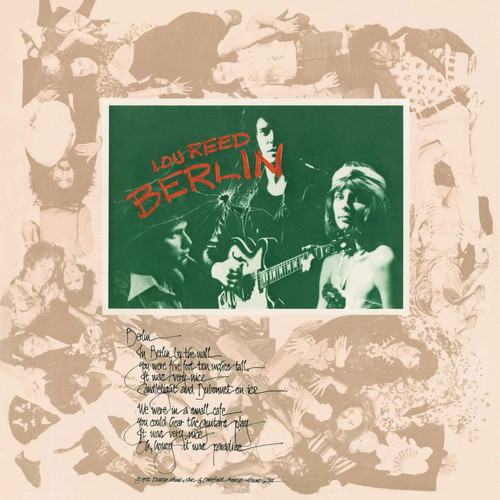 Vinyl LP pressing. Digitally remastered edition of this 1973 release. Berlin is the third studio album by Lou Reed, released in July 1973 by RCA Records. The concept was created when producer Bob Ezrin mentioned to Lou Reed that although the stories told by Reed's songs had great beginnings - they never really had an ending. Specifically, Ezrin wanted to know what happened to the couple from Berlin - a song from Reed's first solo album. The album is a tragic rock opera about a doomed couple, Jim and Caroline, and addresses themes of drug use, prostitution, depression, domestic violence and suicide. Instrumentally, Reed plays acoustic guitar. As with Reed's previous two studio albums, Berlin re-drafts several songs that had been written and recorded previously. The title track first appeared on Reed's solo debut album, only here it is simplified, the key changed and re-arranged for solo piano. "Oh, Jim" makes use of the Velvet Underground outtake "Oh, Gin". "Caroline Says II" is a rewrite of "Stephanie Says" from VU (though the latter was not released until 1985). The Velvet Underground had also recorded an alternate demo of "Sad Song", which had much milder lyrics in it's original form. "Men of Good Fortune" had also been played by the Velvets as early as 1966; an archival CD featuring live performances of the band playing at Andy Warhol's Factory provides the evidence of the song's age.